A Return to Normalcy (Sort of)

Throughout last month’s Winter Storm Uri, NYMEX Henry Hub natural gas prices increased in volatility. Multi-year highs for the prompt month contract (April) along with daily trading ranges almost as high as earlier this winter were experienced. By late February, the winter storm bulls had left the market, and the bears took over. By the middle of March, April’s contract had sold off from the closing price of $3.032/Dth on February 17th to a closing price of $2.483/Dth on March 15th.

Figure 1 shows that since March 15th, the market has lost the directional trend that was observed last month and has consolidated within a 10¢ range for each trading session, staying between $2.48 and $2.57 per Dth.

Figure 2 shows the amount of gas in storage as reported by the EIA on March 25th. In this chart, the red line shows the amount of gas in storage compared to the 5-year average (blue line). Many were expecting that that storage levels would be significantly below average as Withdrawal Season wraps-up at the end of March. This is not the case, however, as Figure 2 shows a deficit of only 3% from the 5-year average.

Both weekly natural gas production and export (both LNG & pipeline) quantities have recovered from their strong dips in the middle of February. Figure 3 shows that LNG exports recently reached a new weekly high of 11.6 Bcf/day after a significant decline during Winter Storm Uri. 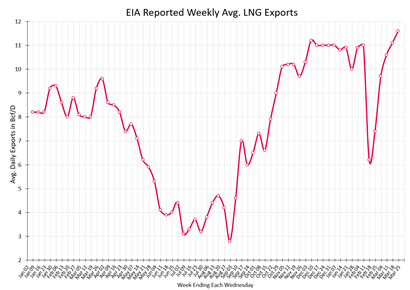 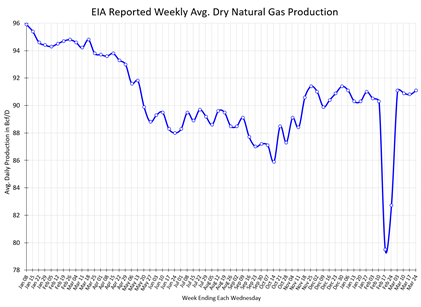 One lasting impact of Winter Storm Uri has been the financial effect of the storm which produced record-high spot natural gas prices and enormous utility bills. The economic fallout for buyers, retail natural gas suppliers, and natural gas utilities has been dramatic. CPS Energy, San Antonio’s municipality, has filed a lawsuit against BP Energy, Chevron and Energy Transfer LP over the gas prices they were charged during the storm. Exxon Mobil has sued Macquarie Energy LLC to avoid paying $11.7 million for gas deliveries that were missed and its claim of force majeure. Spire Missouri, a natural gas utility, is claiming over $100 million in losses over failed natural gas deliveries and is suing Symmetry Energy Solutions, who, according to Bloomberg, is also a target of CPS Energy. These are just a few examples of litigation that is underway and is likely the beginning of tumultuous times for natural gas stakeholders in the aftermath of Winter Storm Uri.

A Texas-Sized Band-Aid for Uri

Microgrids are a Macro Deal