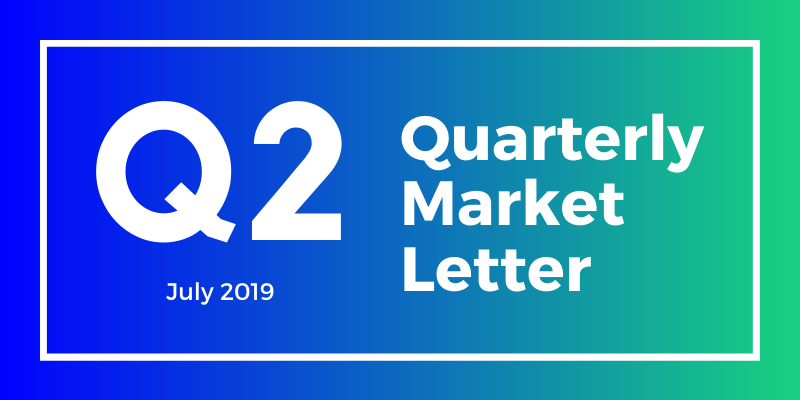 On behalf of the team at 5, I am pleased to forward our market letter for the second quarter of 2019. The beach is a great place to find some wind and not just to fly a kite. In fact, many Northeastern states are counting on offshore wind to meet their renewable generation goals. This letter reviews recent offshore wind developments and explores how realistic these projects are in light of: (i) the relatively high cost of offshore wind, and (ii) the permitting required to construct these projects and the related transmission infrastructure.

Several Northeastern states have set ambitious renewable procurement targets. New York and Maryland are targeting 100% renewable generation by 2040. Not far behind are New Jersey (50% by 2030), Connecticut (44% by 2030), Rhode Island (38.5% by 2035) and Massachusetts (35% by 2030 and 1% more each year thereafter).1 With dense populations, limited onshore wind resources, and poor quality sun, these coastal states are increasingly focused on large scale offshore wind projects as a key source of renewable generation. The current push for offshore wind is driven in part by the success of offshore wind projects in Europe. Some 20,000 MWs of offshore wind projects have been built in Europe over the past ten years. The chart on the following page shows the dramatic increase in turbine output and size over this period. 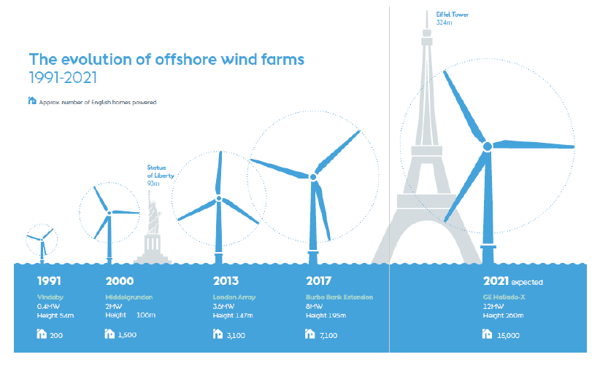 Issue One: How to Think About Cost

The first offshore wind project installed in the US was a 30 MW project off Block Island, RI. The initial PPA price for this project was $244/MWh, and while the price for subsequent projects have decreased (90 MW South Fork reported to be $160/MWh and 120 MW Skipjack project at $132/MWh), cost is still a significant issue.

A detailed analysis by NREL of the Vineyard Wind project (see Massachusetts) puts the adjusted long-term price of the power at $98/MWh. 2 This is comparable to the price of offshore wind projects in Europe. The dramatic reduction in price reflects larger turbines and other technological advances. Yet even at $98/MWh, offshore wind remains expensive compared with other sources of power generation. For example, wholesale electricity for delivery in 2028 trades at the following levels:

Notwithstanding differences in market prices across the Northeast, if offshore wind costs $98/MWh, this is approximately $45 MWh more expensive than the current wholesale market price of power. If 20 GWs of offshore wind is installed at this premium, customers’ power costs will increase by approximately $3 billion per year.3 Of course, if natural gas prices increase dramatically, the premium will decrease. Similarly, if offshore wind prices decline (like onshore wind and solar prices), the premium will also decrease. Even if the difference between the wholesale market price and offshore wind costs remain constant, $45/MWh may be a fair premium for carbon-free generation compared to the overall costs associated with climate change. Regardless, the comparison of offshore wind prices to current market prices is a good way to think about the premium these states are willing to pay for carbon-free generation.

From our experiences in developing power plants, we learned that projects with the least development and operational risk were those that (i) sold power at the lowest price in the market, and (ii) produced power where it was needed the most. The gap between offshore wind prices and current market prices and the abundance of existing generation assets from other fuel sources put the development of these projects at some risk.

Issue Two: Can You Get It Built?

The chart below shows the installed capacity of renewable power and the percent of electricity these projects generate in the states looking to develop offshore wind projects.

As this chart demonstrates, only a small fraction of electricity generated in the Northeast comes from renewable sources. The location of renewable generation in the United States is a regulatory paradox. States with less aggressive renewable incentives generate the most renewable power. As the chart below shows, Kansas, Iowa, Oklahoma and Texas generate 52% of the wind power in the US. 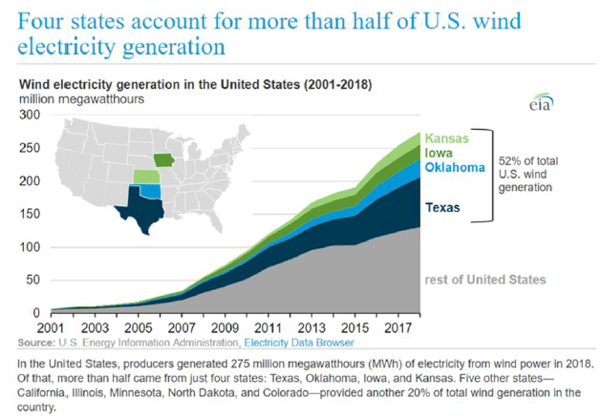 Available land and strong winds are an important part of the answer. You will not find thousands of acres of wind-swept farmland along the east coast. But even so, we think that differences in state regulatory policy contributed to the success of renewable development in states such as Texas.

Northeastern politicians and regulators should seek the advice of their counterparts in Texas to help them think through how to get all of these large offshore wind projects built. Massive wind farms in West Texas generated almost 19% of the electricity in Texas in 2018, and constitute over 23% of the current installed generating capacity in the state. On some days, wind powers more than 50% of Texas’ electricity requirements. The chart below shows the amount solar and wind generating capacity than is planned in ERCOT. Based on this data, Texas should continue to lead the nation in renewable generation for some time to come.

Excellent wind resources and an abundance of land is a large part of the Texas success story. However, the ease of permitting, the state’s willingness to invest $7 billion in new transmission, and the ability to get these transmission lines built are equally important factors. These transmission lines allow Texas to move low cost renewable power from rural parts of Texas to the load centers in Houston and Dallas. Power plants and transmission lines are not the only things that are easily permitted in Texas. Infrastructure projects, on the whole, seem to pop up overnight as state regulations are much more favorable toward development. This is not the case in most parts of the Northeast. In general, any kind of infrastructure and development projects are met with extensive opposition. A good example of this is the Williams natural gas pipeline. This proposed pipeline was designed to address the critical shortfall of natural gas in the metropolitan New York City area through the construction of a 26-inch pipeline that would run under New York Harbor (see map below).

Despite the need for more natural gas in and around New York City, this pipeline project has been blocked by groups that argue that it would, among other things, promote the sale of fracked natural gas (New York State banned fracking in 2014), threaten human health (since it would be placed under the seabed), and harm marine life. While I have not taken the time to review the project or the various objections, it is clear that if New York and the other Northeastern states are going to permit anything close to 20 GWs of offshore wind, the politicians and regulators must find a way to overcome the inevitable opposition to necessary infrastructure improvement (e.g.: transmission lines) from fisherman, boaters, beach front property owners and other interest groups.

The cost and permitting challenges faced by offshore wind provides a perfect litmus test of a state’s commitment to a carbon-free generation fleet.

Of course, please do not hesitate to contact me or other members of the 5 team if you would like to discuss other issues covered in this letter in more detail.

1 The District of Columbia has passed legislation calling for 100% renewable generation by 2032. However, since this note is focused on states with offshore wind potential, we are not including DC in the discussion.
2 Vineyard Wind PPA prices range from $65/MWh to $118/MWh for the period from 2022 to 2042. When tax benefits and other factors are taken into account, the true cost of this power on a levelized basis is estimated at $98/MWh. An analysis done by Lazard at the end of 2018 put the cost of offshore wind at $92/MWh.
3 20 GW x 40% (ave. capacity factor for wind) x 8,760 hrs/year x $45/MWh