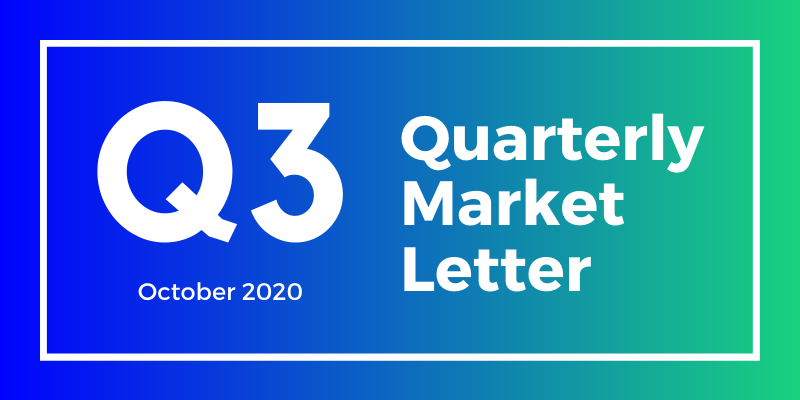 On behalf of the team at 5, I am pleased to forward our market letter for the third quarter of 2020. This letter focuses on the upcoming Presidential election, the confirmation of Judge Amy Coney Barrett to the Supreme Court, and the potential impact of these events on energy policy. The election and a changing court will impact how energy policy is regulated both at the Federal and the state level. Notwithstanding the perceived impact of these changes in Washington, we caution against putting too much weight on political and judicial changes. In short, it is often the case that when it comes to energy policy, economics, not politics, often prevails.

The chart below provides our high-level summary of the likely impact of several different November election results on energy policy.

Renewable energy has the most at stake. A Biden presidency will see the United States rejoin the Paris Climate Agreement, the extension and expansion of tax credits for renewable power plants, an expanded scope for the EPA to regulate pollutants including carbon, an aggressive effort to promote electrification (both for autos and buildings), and the re-introduction of policies focused on controlling emissions from power plants like the Clean Power Plan (CPP) introduced by the Obama administration. President Trump’s re-election means that the US continues to move away from the Paris Agreement, further limits the EPA’s scope, and a continued push for the Affordable Clean Energy act (ACE) – a more limited effort to regulate power plant emissions that scales back the policies set forth in the CPP.

Regardless of who wins the election, it will not be easy for the winner to translate his position on energy policy into legislative action without the President’s party gaining control of the House and Senate. If Congress remains split, it will be very difficult for either administration to pass broad sweeping energy regulations, although the President still retains the ability to veto bills he does not like.

FERC: THE ELECTION HAS CONSEQUENCES

One thing is clear: the President will appoint a majority of the commissioners at the Federal Energy Regulatory Commission (FERC), and the commissioners will have an impact on energy policy. Today, FERC has only 3 commissioners - 1 Democratic commissioner and 2 Republican commissioners1. In recent rulings, particularly its holdings on (i) Minimum Offer Price Rule or MOPR and (ii) Broadview Solar, President Trump’s FERC is aggressively taking steps to introduce policy changes that hamper renewable power development.

MOPR: As noted in our last quarterly letter, in December 2019 FERC rejected PJM’s auction rules, ruling that the capacity auction rules must be changed to mitigate state subsidies for renewable power. This ruling, once enacted, could impair the value of various state subsidies including Renewable Energy Credits (wind and solar), Zero Emission Credits (nuclear power), and Offshore Renewable Energy Credits (offshore wind). PJM has revised its auction rules to address FERC’s concerns and FERC has accepted most of these changes. However, there are enough unsettled issues that the May 2019 capacity auction (for the 2022/2023 capacity season) has still not occurred – or even scheduled. PJM says it will try to expedite the 2022/2023 auction but it will take at least 6 months to run the auction.

Various states are challenging FERC’s MOPR ruling in court, and New Jersey, Maryland, Illinois and Pennsylvania are all considering exiting the PJM market to gain further control over renewable subsidies. In New Jersey, Senate Bill 2804 passed the Senate Energy and Environmental Committee. This bill requires the state utility commission to analyze exiting PJM and to consider, among other things: (i) exiting PJM and forming an independent ISO, (ii) exiting PJM and joining the New York ISO, and (iii) staying in PJM. If Biden is elected, we expect that a Democratic majority at FERC will quickly move to reverse FERC’s MOPR ruling and take steps to support state subsidies of renewable power.

Broadview Solar: A September 2020 FERC order in the Broadview Solar case has sent shock waves through the renewable developer world. In this case, FERC modified the way they have historically approved Qualified Facilities (QF’s)2 to the disadvantage of Broadview and other solar projects. The Broadview facility uses a 160MW solar array and a 50 MW battery project to store power. To meet the definition of a QF, a generation project cannot exceed 80 MWs. Broadview planned to install inverters (needed to convert DC power generated by the panels to AC power) that limit the project’s output to 80 MWs. The large array allows the project to generate more power when there is limited sunlight but the project’s output can never exceed 80MWs.

FERC ruled that in addressing QF status for this project, it was important to look not at the output of the project but at the potential output of the project’s various components. Since the solar panels could theoretically generate over 160MWs, QF status was denied. This decision upended 40 years of rulings that focused on the output of a generation facility, not the capacity of its components. FERC did not rule on the 50 MW battery project. FERC’s ruling appears to be motivated solely by the Commission’s desire to hamstring solar developers. Again, a Biden FERC is likely to reverse the Broadview ruling.

No matter who wins the election, decisions made by FERC and policies set by Federal agencies like EPA are likely to be contested in court. Replacing Justice Ginsburg with Justice Barrett causes a fundamental change in Court’s composition. Post confirmation, there are 6 conservative justices (Alito, Thomas, Gorsuch, Kavanaugh, Barrett, and Roberts) and only three liberal justices (Kagan, Breyer and Sotomayor). The new court will impact legal rulings on critical issues like healthcare, however, it is less clear how the new Court’s rulings will impact energy policy.

A more conservative Court is likely to further limit the power of the Executive and of Federal agencies, like EPA, to impose Federal policies on state governments. In general, conservative justices, such as Judge Barrett, favor state rights and support limits to the Federal government’s power. If Judge Barrett is confirmed, it may be more difficult for a Biden administration to use his executive power to impose environmental regulations on the states. At the same time, a conservative court could limit President Trump’s ability to hamper state efforts to set aggressive renewable mandates.

Ironically, the last important Supreme Court decision on energy policy was in Hughes v. Talen Energy Marketing, and was written by the late Justice Ginsburg. This unanimous ruling struck down Maryland and New Jersey’s efforts to provide a fixed capacity price to new gas plants. State regulators authorized these capacity payments because they felt that PJM’s capacity market did not sufficiently incentivize new gas-fired generation in their respective states. The Supreme Court invalidated the Maryland and New Jersey contracts, finding that they unlawfully interfered with the auction rules set by PJM and approved by FERC. Since the Hughes case was decided, it has become apparent that New Jersey and Maryland could not have been more wrong. These states should thank Justice Ginsburg and the Supreme Court for a decision which, in hindsight, avoided state subsidies for plants that are not needed. All state and Federal regulators should take a close look at the Hughes case before second guessing the efficiency of competitive energy markets.

It is interesting to speculate on how a changing Executive Branch and/or Supreme Court may influence energy policy. But no matter what politicians think, it will be very difficult (and quite dangerous) for Federal or state policies to overturn the fundamental economics of the changing energy market. An example of this is the recent announcement from BP, one the world’s leading developers of fossil fuels, to focus again on renewable energy. This is not driven by altruism, it is driven by a realization that they can get better returns from renewable assets than from fossil fuels.

The success of wind and solar energy in Texas, a market with limited subsidies tells a similar story. As the chart below demonstrates, wind power continues to make up a larger and larger portion of the installed capacity in Texas. 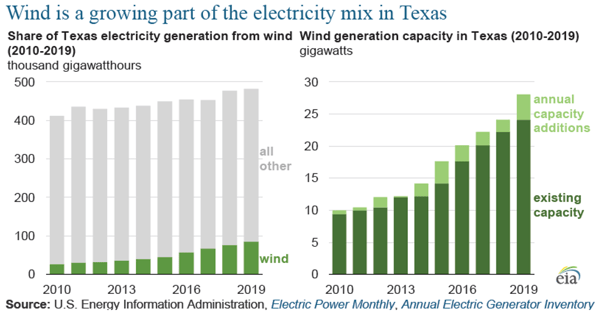 Solar is not far behind. The chart below provides a snapshot of the massive quantity of solar projects in development in Texas and the impact that such projects could have on existing coal fired generation. 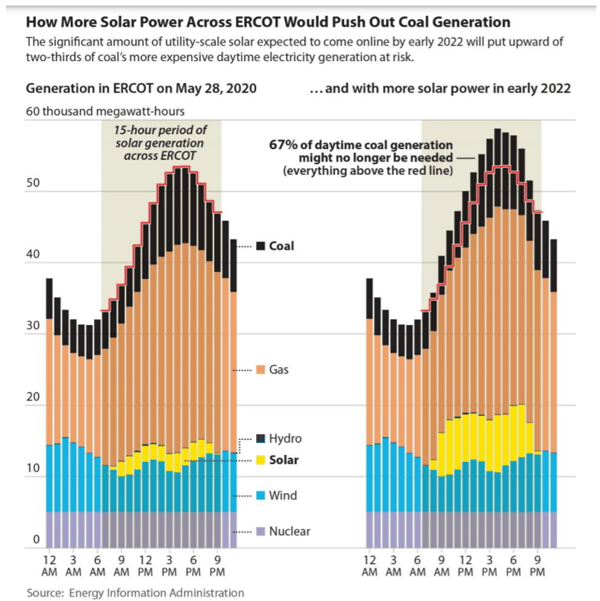 Texas offers a good example of how an open market can create a vast amount of renewable generation without state subsidies. By contrast, states like New York, New Jersey, and Maryland rely on aggressive state mandates to meet carbon reduction goals. These mandates have yet to result in an equivalent growth in renewable generation. For example, Maryland has a little more than 1,200 MWs of installed solar generation, and these plants generate around 4% of the state’s electricity.

In addition, states like Maryland, New York and New Jersey have yet to come to grips with the impact that such renewable mandates will have on the price of electricity. For example, while New York continues to set more and more aggressive renewable targets, the state’s regulators have not identified the cost of reaching these targets.

In conclusion, while we can expect significant legal and regulatory changes in the months ahead, we urge caution. It is easier to set aggressive mandates than it is to pass along the increased electricity prices that result from such mandates. We look forward to working with our clients to ensure that their procurement strategies have the flexibility to meet changing environmental standards. Any such strategy must include a realistic understanding of the risks that regulatory goals may need to be modified when regulators understand the cost such policies impose on energy buyers.

As always, please do not hesitate to contact me or other members of the 5 team if you have energy related questions or you would like to discuss the issues covered in this letter in more detail.

[1] Two additional commissioners, Mark Christie (R) and Allison Clements (D) have been nominated but not confirmed.
[2] QF status is important for the project as it requires the local utility to purchase the project’s output.