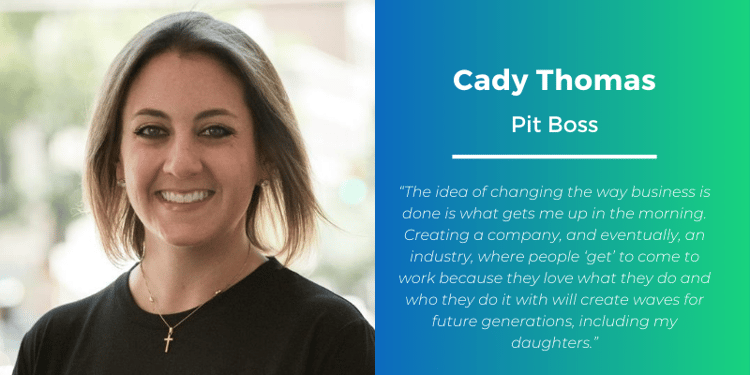 Cady’s work in the energy industry began as a sales support analyst for First Choice Power shortly before she joined 5 as the company’s first employee in late 2011. She accepted the job knowing that she’d be asked to play a pivotal role in the creation of 5’s unique company culture.

As Pit Boss, Cady leads the Pit Crew, the operational hub of the company. She is responsible for managing the company’s processes and interactions with key stakeholders including suppliers, utilities, vendors, and the internal team as well. The Pit Crew handles thousands of requests each week including custom analytics, retail pricing, and deal structuring, on-going client service, and automation, while also ensuring the seamless flow of information and communications among team members and clients.

Additionally, Cady is a member of the company’s leadership team, providing strategic vision and oversight of the company’s culture, communications, and process improvement. In a company where culture comes first, Cady’s optimistic attitude, tenacity, and willingness to serve is felt throughout the organization.

Cady’s Why: “The idea of changing the way business is done is what gets me up in the morning. Creating a company, and eventually, an industry, where people ‘get’ to come to work because they love what they do and who they do it with will create waves for future generations, including my daughters.”

Connect with Cady on LinkedIn.