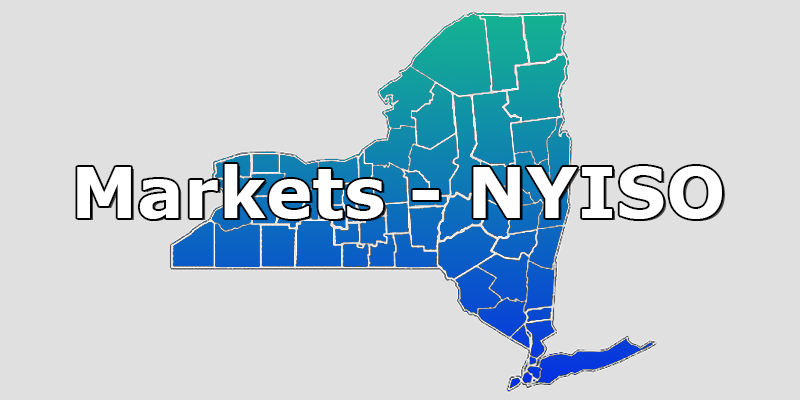 Electricity prices in NYC are starting to show signs of consolidation. Earlier this winter, mild temperatures in the months of November and December placed downward pressure on both near-term gas and power futures prices. This can be seen in Figure 1, which shows wholesale forward electricity prices in NYC for calendar years 2022 through 2025. This market correction, which lasted through the end of December, created good purchasing opportunities for many in NYC. Since the beginning of the year, prices have rallied, increasing between 2.5% and 5.1% across all calendar years except 2023. Note the flat to downward slope of electricity prices for calendar year 2023 (black line). While near-term prices in 2022 have rallied, falling prices in 2023 and have produced a degree of consolidation and created good purchasing opportunities.

While wholesale prices have rallied since the beginning of the year, prices for calendar years 2022 and 2023 remain near the bottom quarter of the 4-year historical trading range. Figure 1 shows that the forward prices hit their most recent lows in March of last year. And while the market has rallied, prices are only between $1.06 and $4.50 per MWh higher than the lows that were set last year. This is shown in Figure 2, which charts the 5-year forward wholesale trading range for electricity in NYC. The height of the green bar shows the 48-month range of low and high prices for the calendar years on the x-axis. The black bar shows where prices were trading as of 2/24/21. Note that prices for calendar years 2022 and 2023 are near the bottom of its 4-year historical trading range. The coupling of these low prices with falling capacity prices has created good purchasing opportunities for electricity customers in NYC with open positions in those years. 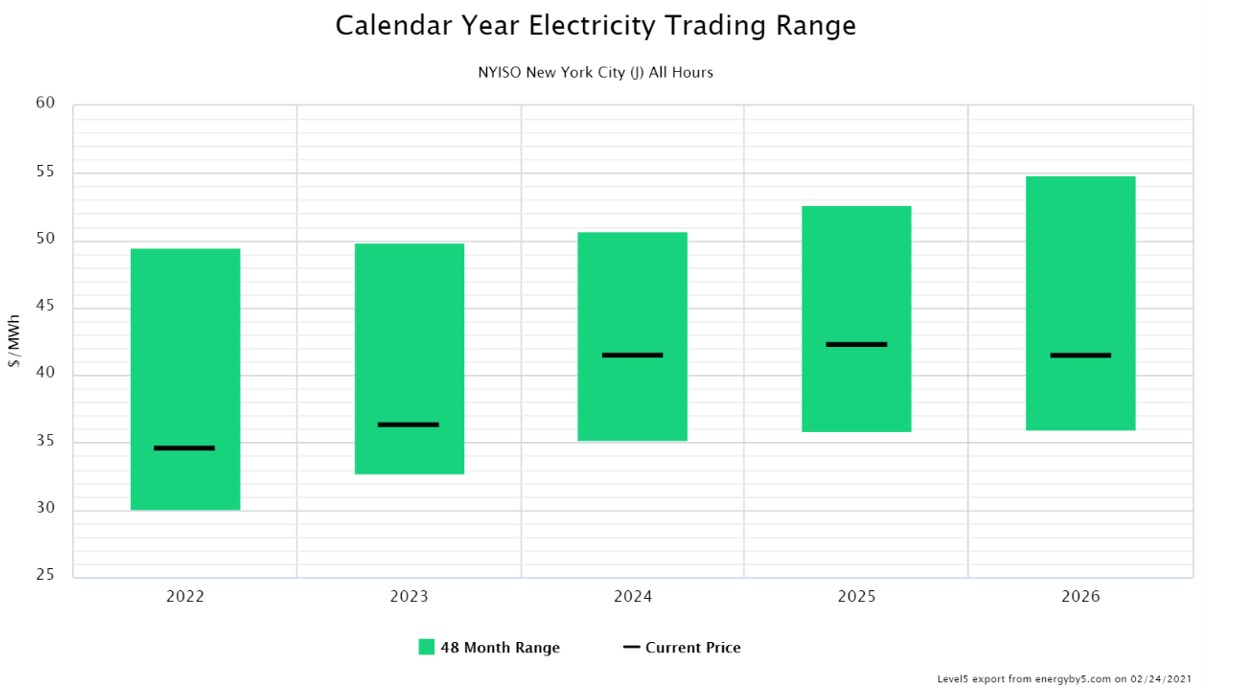 The New York State Legislature has begun advancing several pieces of legislation designed to reduce statewide emissions from fuel oil. Three bills have passed out of the Senate’s Environmental Conservation Committee that have an excellent chance of being sent to the Governor’s office to be signed into law. Bills must have a “same-as” version introduced and passed in the state Assembly before they can be sent to the Governor’s office. In general, when a bill is passed out of a Senate or Assembly committee, it has what Albany-folk call “legs”, meaning it has momentum and will likely pass a full vote by the respective legislative body.

In 2015, New York City banned the usage of #6 fuel oil within its jurisdiction. However, legislation carried by Senator Kaminsky and Assemblymember Paulin, S2936 & A5029, would create a statewide ban on #6 fuel oil that would go into effect on July 1, 2023. This bill was passed by the Senate Environmental Conservation Committee. As with the legislation banning #4 fuel oil, this bill has yet to see a vote in the Assembly Environmental Conservation Committee but will get a vote by the full Senate sometime in 2021.

Finally, the Senate Environmental Conservation Committee also passed legislation carried by Senator Alessandra Biaggi, D-Bronx, that would require all above-ground petroleum storage tanks to be painted white or beige. The legislation, S841, is designed to reduce air pollution that results from petroleum storage tanks heating up and producing fumes. Unlike the two bills discussed above, this legislation has not yet gained an Assembly sponsor. However, this is a brand-new bill and will likely garner support as it picks up momentum in the Senate.