Tasseography is a fancy word for fortune-telling by reading tea leaves. Humans often search for patterns in hopes of predicting the future just as we do with financial markets. While serious investors would never resort to reading tea leaves, technical traders and fundamental analysts look for patterns and trends to better understand and anticipate market movement.

Technical traders are reactionary as they analyze the market conditions in real time, studying what everyone else is doing and trying to anticipate where the market is going based on the price movements within the market.

Fundamental analysts are more proactive, attempting to predict the future of a commodity based on the “fundamentals” of the market, supply and demand, and the associated factors that impact either of these two elements.

Today’s natural gas market is difficult to predict as the technical and fundamental analysis results are not offering any clear direction.

From a fundamental perspective, there is currently an abundance of natural gas in storage. The US is also producing more natural gas than expected. These bearish forces should put downward pressure on natural gas prices. The only bullish factor has been the warmer than average summer across most of the country. Higher summer temperatures mean that more natural gas is used for the power necessary to support additional cooling demands. Figure 1 shows that this summer’s gas consumption has consistently exceeded the five-year average and set a record for peak usage on six different days. 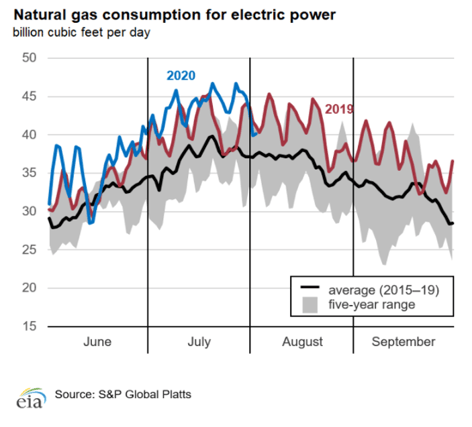 The record amount of natural gas consumption was offset, to some degree, by reductions in LNG exports. Figure 2 shows that exports have fallen dramatically over the last six months. Natural gas that would have been exported has now been placed in storage, which has increased supplies to the point where storage levels now exceed the 5-year average. 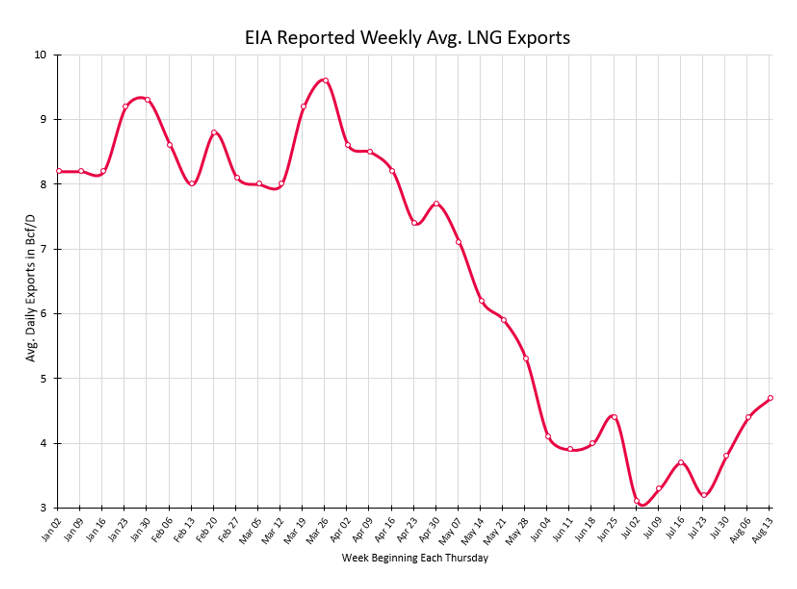 Despite what seem to be bearish fundamentals, natural gas prices have been on the rise. Figure 3 shows how the September NYMEX contract has traded over the last year. Prices for this contract have steadily increased after hitting a low in June. And since July 20th, the price for September’s gas contract has increased from $1.68 to $2.51/MMBtu as of 8/24/20, a 49% increase in prices over the last four weeks. 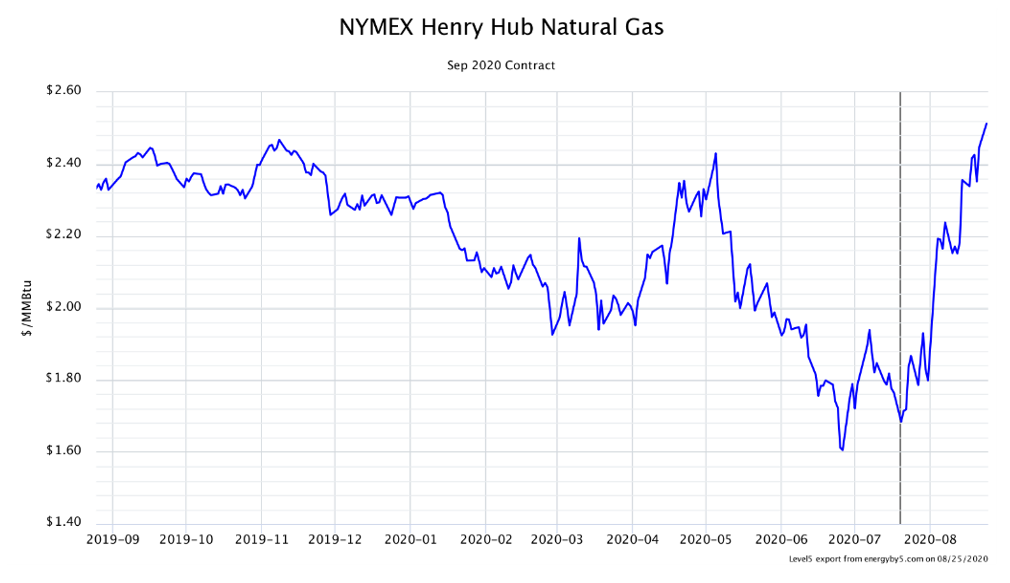 A technical analyst is less concerned about how much natural gas is in storage and is more concerned about the directional market movements such as those shown in Figure 3. Technical traders use adaptive moving averages, historical support (price floors) and resistance levels (price ceilings) to determine when a market is in a rally or a correction. Markets are hard to predict when its magnitude and direction are as strong as what has been observed with natural gas. It has already passed its 12-month high and has exceeded all recent resistance (ceiling) levels – and there are few signs that it is about to slow down.

A counter to a technical trader is the fact that despite data trends, markets never move in one direction forever. Typically, the basic forces of supply and demand that fundamental traders favor tend to win in the end. Many equity traders are caught in the same conundrum as the S&P 500 is at all-time highs despite bearish fundamentals in the marketplace.

So, where is this market going? It is difficult to say. Technical and fundamental analysts would likely come to separate conclusions. One might be tempted to consult their favorite Tasseologist and seek direction in the tea leaves at this point. However, a better plan is to be prepared for both contingencies and make purchasing decisions based on risk tolerances after consulting with your energy advisor.