Why is Natural Gas not Following Crude Oil into the Basement?

The market price for oil has been consistently bearish since global oil demand destruction conversations began in early March.  On Monday, April 20th, that outlook manifested itself into a day that oil traders will never forget. Crude oil opened trading on Sunday evening at approximately $17 per barrel and by mid-morning, it had dropped to $10 per barrel. By mid-day, it was trading just above zero, and then it broke through into negative territory in the afternoon.  Crude oil settled for the day at -$37.63, up just a few dollars from the daily low of -$40.32 per barrel.

Since Monday was the next to last trading day for the May contract, a lot of this volatility was driven by technical drivers, including that traders were selling out of their May positions and rolling them into the June contract. This generated more sellers than buyers for the May contract. On Tuesday morning, prices quickly recovered out of the negative territory, and traded around $4 to $5 per barrel for most of the day, making its final settlement of $10.01 per barrel on Tuesday afternoon.

Crude oil’s supply and demand balance are relatively easy to understand. Supplies currently far outweigh demand as demand has been dramatically reduced by the transportation sector, which has come to a near standstill. The forces driving the natural gas market are not as clear or intuitive. Natural gas prices for Q3 of 2020 and beyond have done nothing but climb, moving in the opposite direction of crude prices since March 9th when Saudi Arabia announced its intent to flood the oil market with cheap oil. 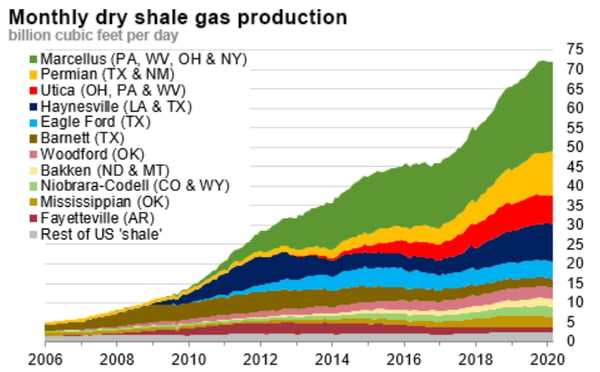 The threat of less inexpensive gas coming out of the Permian Basin has had a dramatic impact on natural gas prices for the calendar year 2021 and shown in Figure 2.  This chart shows that the market has erased nearly two years of downward trending prices over the last 30 days. While the calendar year 2021’s all-time low price was set on March 6th, closing prices on April 20th approached the 2-year high that was set at the end of the winter of 2018.  This market is turning out to be the pure definition of a black swan event, an event so rare it is seldom seen and entering into uncharted waters. 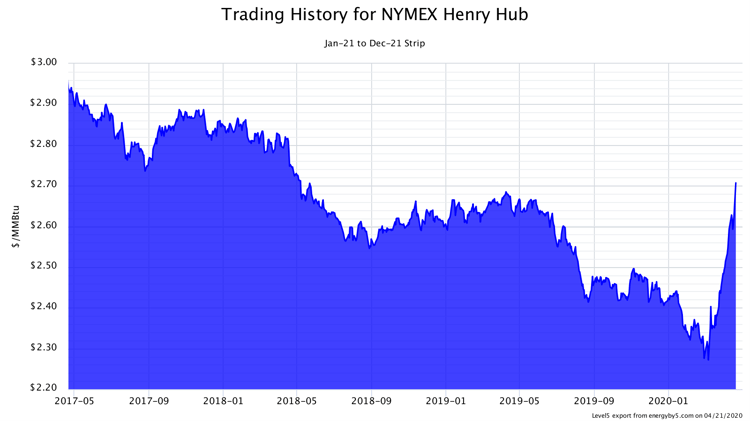